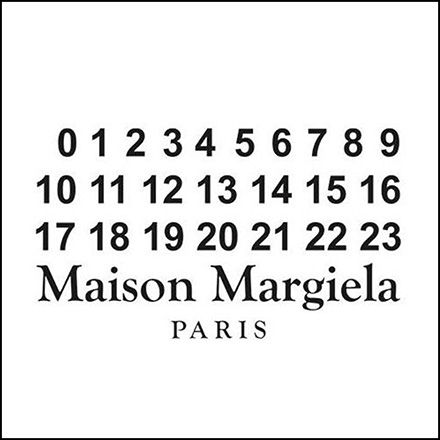 Maison Margiela is a French fashion House, founded in Paris in 1988 by Belgian designer Martin Margiela.

Both masculine and feminine, oftentimes fusing the two genders, the House takes a cerebral approach to deconstructing, reinventing and redefining men’s and womenswear silhouettes. Since 2012, Maison Margiela has held the official ‘Haute Couture’ appellation from the Féderation Française de la Couture for its collection entitled ‘Artisanal’.

In 2014, British couturier John Galliano was appointed as the House’s Creative Director. Margiela’s uncompromising approach to its iconoclast heritage is cast through Galliano’s poetic vision of Haute Couture, marrying conceptualism with artistry, mystery with modern elegance.

Each garment is marked with a plain white label, fastened by four stitches, which can be cut and removed to render the garment anonymous.

The Maison’s plain white label is joined by a new label: marked in black with numbers 0 – 23, the circled digit indicates to which line the garment corresponds.